No spoilers of note to worry about, incidentally.

I'm not really the typical player of this kind of game.  I've never liked point and click adventure games and the only one I ever finished is Full Throttle (technically I finished The Curse of Monkey Island, but that was with liberal use of a walkthrough, just to see the funny bits).  I've also never seen the TV show nor the comics.  But with all the hype I decided to pick it up on a Steam sale about a month ago.

Let's first get the technical aspects out of the way.  The Walking Dead isn't like old school adventure/point-and-click games.  There aren't really any puzzles as it is always quite obvious what to do next and you don't have an inventory that amounts to anything.  In fact there aren't really any parts of the gameplay that are challenging at all.  So as a "game" in the traditional sense, there isn't much to see here.  It is more a highly interactive movie.

As for graphics and sound, I personally love it.  The art style and animation somehow communicates the mood very well and in this kind of a game that is what matters most.  The sounds and especially the voice acting is almost uniformly brilliant.

But onto the reason this game is so special - the story.  Actually not so much the story, which is actually quite simple, not even the "choice" aspect, which is actually quite limited, but the manner in which the story is told.  This is what makes The Walking Dead a truly stand-out game and one that other game developers and indeed even filmmakers - or writers in general for that matter - should take notice of.

This game isn't about action, or puzzles, nor strategy or anything else.  The game is about telling a story and not so much giving you choices in your actions, but more about making you think why you made the choices you did.  A lot of it comes down to the simple mechanic of forcing you to make your decisions in a set amount of time, sometimes a few seconds, sometimes barely even a second, and often only with bad and worse options.

Oddly enough it most makes me think of The Witcher, in that you are often given hard decisions with only shades of grey and not enough information to make a fully informed decision as to the best move.  The difference here though is that in The Witcher I would often sit back for a minute or two, look over everything that happened and make the best choice I could based on the data I have.  In The Walking Dead you may have 2 seconds and if you don't decide, it decides for you.

This aspect creates some interesting, introspective moments.  I have a choice between two people to save, why did I chose one over the other?  Well... She was hot.  Had I sat back and thought for a few minutes I may have made a different decision, but in the couple of seconds I had, I wanted to save the pretty one.

Without giving any of the story away, there is one particular decision I made which looking back still disturbs me now.  Two of my friends who played the game made a different decision and thought I was quite insane for the decision I made.  My reasoning made sense in the few seconds I had to make the decision; but looking back had I made that decision in real life, I'd probably be looking to shoot myself about now.  That wouldn't have happened had I been able to sit back and think about what to do, and that is why this mechanic adds so much to the game.

Of course all that would be for nothing if the game had boring characters or a poorly told story.  But that leads to the next stand-out feature of this game, the characters and the way they are presented to you.  There are several brilliant characters throughout the game and the developers have an uncanny skill of introducing a character and 5 minutes later having you interested in them, knowing a bit about them and actually having feelings regarding them (whether positive or negative).

The most obvious example of this is your introduction to the main character of the story (besides Lee, the character you play), Clementine.

****SLIGHT SPOILER FOR THE FIRST 5 MINUTES OF THE FIRST CHAPTER****

You meet Clem a few minutes into the game, after a brief walk inside her house where you find out a bit about what happened to her and her family.  Shortly after you discover that she's managed to survive on her own for several days, was smart enough to get herself into a safe place, is level headed enough to respond when she sees a real non-zombie and brave enough to come and save your ass, risking her own life in the process.

I think Jimquisition has said all there is to say about this, but in short within a minute of meeting her character you already know pretty much all you need to know about her to understand her and like her.

The same kind of thing happens when you run into several new characters over the course of chapter one,  You always get some scene early on that gives you a good idea what the person is like, what their motivations are and so on; and presented well enough that it is actually convincing rather than contrived.

The final trick the game uses to get you involved is to do with how much you interact with different goings on.  Normally as with any adventure game, you click on something and something happens.  But in some scenes, when things are tense or emotionally jarring, the game makes you painstakingly click through each minor action you are doing, drilling into your head just how messed up the situation is, and bringing to mind this Penny Arcade strip: 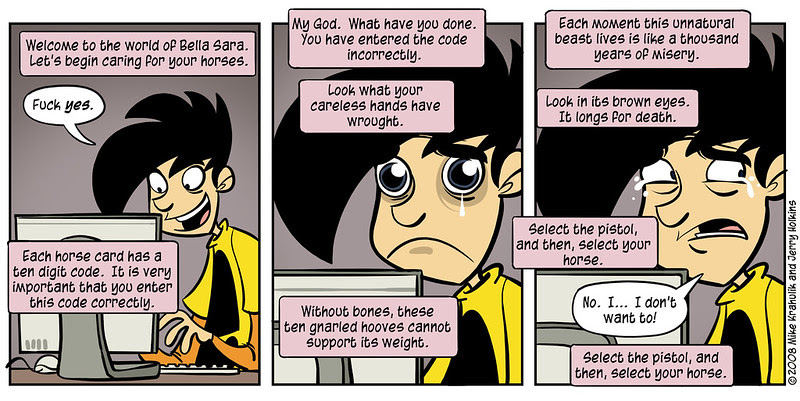 The end result of all this is essentially a very well told TV mini-series, that let's you give just enough input to the story that you feel responsible for the characters and what happens to them... And thus far more affected when things all go to hell.  As they do.  A lot.

I stated earlier that as a "game" there isn't a lot to see here, but that really begs the question "What makes a game anyway?"  Perhaps it is the breadth of the term "game" that needs considering instead?  The game here isn't the pointing and clicking, nor even the choices, story or the character interaction.  The game here, the thing that has elevates this title to Game of the Year status (or at least contender) for so many people is actually the breaking of the fourth wall itself.  The "game" is to take a human, put them in front of a screen and make them question their own morality, and then kick them in the gut just because.

And at that, it beats any other game ever made.
Posted by Anonymous at 01:13

Email ThisBlogThis!Share to TwitterShare to FacebookShare to Pinterest
Labels: Reviews of Awesome